Unless you’ve been hiding under a rock (like me) you know that Netflix is the bombdotcom for kids. (And grown ups!) While we’ve been binge watching House of Cards, our girls have been loving the movies on their iPad. They even declared that they are over princess movies (finally!), and since we’ve graduated to non-animated movies, I started searching Netflix. That’s when I made this list – 30 Awesome Non-Princess Netflix Movies for Kids.

We’ve traveled a ton lately and movies have saved our butts on flights, cruises, and road trips. And while we haven’t seen all of these, I’m was super impressed with the selection of non-princess Netflix movies for kids. So kick back and watch one of these on your next movie night, they’re so good they might even make you put down your phone and watch too!

In this family-friendly phenomenon, basketball star Troy and brainy transfer student Gabriella defy their friends’ expectations by choosing the school musical over their usual pursuits. Meanwhile, romance is in the air for the unlikely couple.

2. An American Girl: McKenna Shoots for the Stars

An up-and-coming gymnast is on track to make the regional competitive gymnastics team but off track in school, where she’s struggling to keep up. When her teacher suggests a tutor, she’s embarrassed and desperate to keep it a secret from her friends.

3. Alice Through the Looking Glass

In this trippy sequel to the 2010 blockbuster “Alice in Wonderland,” young Alice returns from several years at sea and again passes through to the magical landscape, where she ends up journeying into the past to try to save the Mad Hatter.

Roald Dahl’s spooky children’s book is transformed into a family-friendly fantasy centering on young orphan Sophie, who meets a colossus called the Big Friendly Giant — who’s exiled from his peers for refusing to eat boys and girls.

Check out these 30 awesome non-princess movies for kids on @Netflix!

Inspired by the animated Disney classic, this live-action adaptation of Rudyard Kipling’s beloved novel follows young Mowgli as he navigates a jungle full of wonder and peril with his animal allies Bagheera the panther and Baloo the bear.

When a mysterious 10-year-old boy, Pete, turns up, claiming to live in the woods with a giant green dragon, it’s up to a forest ranger, Grace, and the young Natalie to learn where the boy came from, where he belongs, and the truth about this magical dragon.

This family tale chronicles the adventures of Paddington Bear, who’s rescued at a train station and taken home by a young boy. Paddington adapts quickly to city life, but there’s an evil taxidermist in town with her eye on the lovable bruin.

When a fast-talking lawyer gets a DUI, he’s sentenced to community service coaching the Mighty Ducks, a kids’ hockey team with a lousy record. He takes on the job as a challenge but soon vows to transform the misfits into winners.

The target of endless verbal abuse at school, 14-year-old Jamie (Kay Panabaker) documents her pain in a private journal. When she unwittingly submits the journal to a writing contest, Jamie becomes famous and very, very popular. Stardom comes at a price, however, and Jamie must judge the quality of her own character. Director Paul Hoen brings Julia De Viller’s book to life in this screen adaptation originally aired on the Disney Channel.

With her country in political turmoil, teenage princess Rosie enters a protection program and winds up relocating to rural America, where she makes new friends and learns a variety of life lessons. Not too princessy I promise!

Charming Lizzie McGuire and her pals Gordo, Kate and Ethan go on the ultimate Roman holiday in this Disney comedy. While there, Lizzie’s mistaken for pop music icon Isabella and is soon transformed into a star.

Despite Mitchie’s (Demi Lovato) beautiful voice and musical aspirations, the only way she can attend the pricey rock camp she wants to go to is to help in the kitchen — a fact she goes to great lengths to hide. But when celebrity camp counselor Shane Gray (Joe Jonas of the teen pop band the Jonas Brothers) overhears her singing without ever seeing her face, he makes it his mission to find the girl whose voice has captured his heart.

None-too happy about moving to a small Maryland town, teen Zach Cooper finds his outlook changing after meeting the gorgeous girl next door, Hannah Stine — whose reclusive father happens to be hiding a big secret.

When a conscientious father loses his lucrative dot-com job and faces economic ruin, he joins two friends in opening a business called Daddy Day Care. But as the venture takes off, it attracts the attention of a rival who doesn’t like competition.

When a money-laundering criminal nearly runs over 11-year-old Preston, he gives the boy a check — which he accidentally leaves blank. Preston goes on an epic spending spree, but he may land in some trouble when the crook comes back to collect.

16. The Little Rascals Save the Day

Updating the classic 1930s series for a new generation of fans, a mischievous gang of third graders wreaks comedic havoc on their surroundings. Besides getting into trouble wherever they go, the kids are always looking out for their beloved grandma.

Updating the classic 1930s series for a new generation of fans, a mischievous gang of third graders wreaks comedic havoc on their surroundings. Besides getting into trouble wherever they go, the kids are always looking out for their beloved grandma.

When they find themselves stranded in the Alaskan wilderness, the canine offspring of famed sports star Air Bud team up with an experienced sled dog and a husky pup, who teach them the importance of working together.

This family-friendly adventure finds Budderball, Buddha and their adorable puppy pals heading to the sands of Egypt, where they brave ancient tombs and other dangers in a quest to find Cleocatra’s legendary lost collar.

When a professor develops a vaccine that eliminates human allergies to dogs, he unwittingly upsets the fragile balance of power between cats and dogs and touches off an epic battle for pet supremacy in this family adventure.

After a singing pup with big dreams of stardom gets dognapped and escapes with a friend’s help, her journey home is a fun, music-filled adventure.

A lovable golden retriever, a sassy cat and a feisty bulldog pup mistakenly believe their owners have abandoned them in this lighthearted adventure. The trio sets out on an incredible journey to be reunited with their family.

Ordered to clean up the graffiti he painted at a marine theme park, troubled young Jesse unexpectedly bonds with a killer whale on exhibit. But when the park owner threatens to kill the orca, Jesse must hatch a plan to rescue his aquatic friend.

A badly maimed juvenile dolphin is given a new tail, and a new life, through the efforts of the humans who save it in this true-life adventure saga. After losing its tail to a crab trap, the dolphin is doomed until a young boy spots its plight.

25. The Water Horse: Legend of the Deep

Young Angus MacMorrow watches in awe as the mysterious egg he found on the shores of a nearby loch hatches into something incredible. But how long can he keep his ever-growing secret from his mom — and an increasingly concerned Scottish government?

Newlyweds Nick and Suzanne move into a big fixer-upper in the suburbs, but their happy new life together is thrown into disarray by an oddball contractor who bonds with Suzanne and her two children as the renovation project escalates.

In this updated twist on Louise Fitzhugh’s children’s classic, intrepid writer Harriet Welsch is determined to become the class blogger despite stiff competition from her archrival, the snooty Marion Hawthorne.

When his treasured bicycle is stolen, Pee-Wee Herman is devastated — and he’ll do anything to get it back. Working off a hot tip that his wheels may be stashed in the Alamo’s basement, Pee-Wee sets off on a whirlwind cross-country adventure.

When Hallie Parker and Annie James meet at summer camp, they think they have nothing in common — only to discover that they’re identical twins. Soon, they’re up to their freckles in a scheme to switch places and get their parents back together.

With new scenes and special effects, the 20th anniversary re-release of Steven Spielberg’s 1982 smash hit tells the heartwarming story of the special bond 10-year-old Elliot forges with an alien he names E.T. 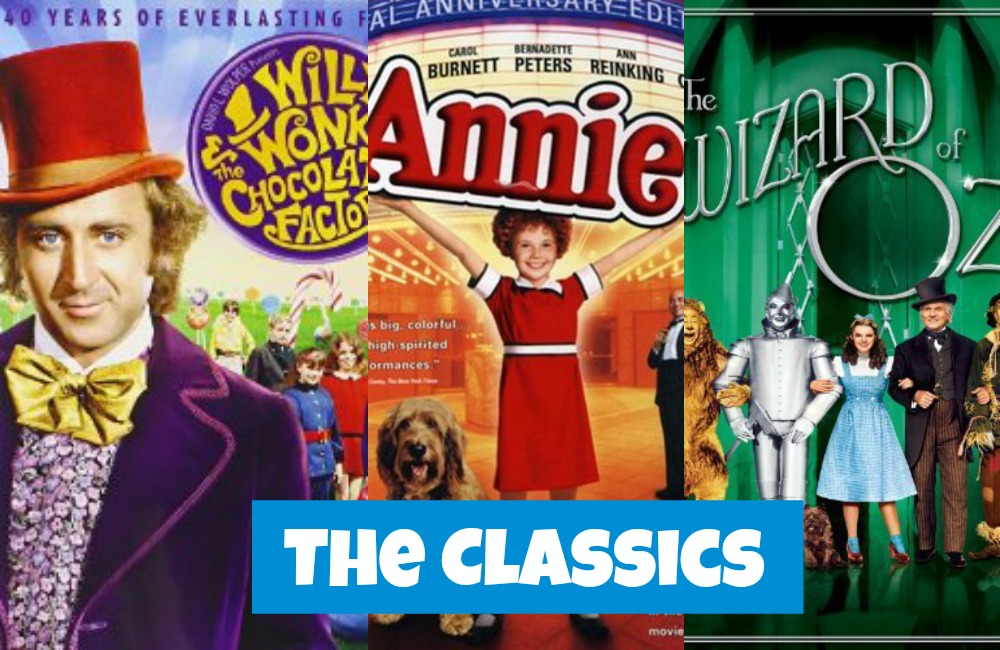