Before I had kids, I had such idealistic views of what motherhood really was. During those years of fertility treatments and acupuncture, I imagined quiet snuggles with my baby in the hours before the sun rose.  I pictured serene scenes on Saturday morning watching cartoons, followed by soccer games and playing in the pool. I dreamed of school plays, back to school shopping, and having a little friend to go to the movies with.

Then it happened…I had not one but two miracle babies. They were sweet little friends until our littlest turned two, and then the battles began. The hair pulling, toy stealing, rolling on the floor wrestling days where just finding three minutes of peaceful playtime are next to impossible. Sure they love each other, but my days as “just a mom” have ceased to exist. My resume now includes the job title referee, and the days are filled with me saying things I never imagined possible. 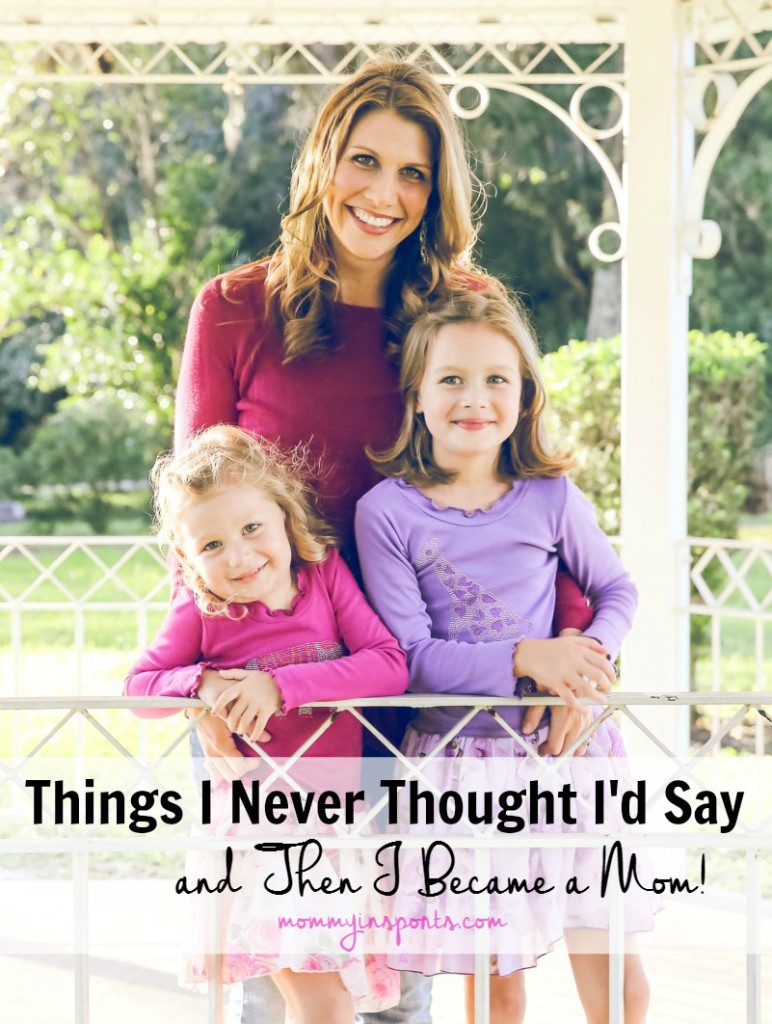 things i never thought i’d say, and then I became a mom

“Don’t lick your sister! “– Seriously? Licking each other? Ick. I feel like vomiting in my mouth each time I see their tongue reach over to the other one…it’s like super slow motion when Emmitt sees Wild Style in the Lego Movie.

“Please stop eating the sunscreen.” –Who invented the foam that resembles whip cream? Note to self, buy the spray.

“Get off the pole.” – I was hoping I would never have to worry about them dancing on a pole (aka her four poster bed)…well ever. But we are in a clothes shedding, booty shaking phase. This is a phase, right? I sure hope so.

“Let go of my boob!”– Our two year old stopped nursing over a year ago, but she’s still obsessed with boobs. When we are in new environments she clings to me, and inevitably pulls my shirt down near my breast. Nine times out of ten she exposes my bra, and once my entire boob. I’ve learned to wear high neck t-shirts, no tank tops or v-necks.

“Stop putting boogers on your nightstand!” – I mean, not just a couple. Like an entire side of her nightstand is a shrine to booger-ville. I guess it’s good that she doesn’t eat them right?

“Poop is not a food group.” – It’s the Summer of potty talk. Every day. What do you want for lunch? “Poop!” What type of muffins should we make? “Poopy muffins!” Let’s make a birthday cake for daddy, what type of frosting will he like? “Poop”. Cue the giggles.

“No, I will not cook your butt and eat it.” – And of course when I tell them they cannot say poop at the dinner table, they tell me they’d like to eat their butts, after we cook them. Is butt really that funny? I don’t get it.

“You can poop in your pants if you want…just please go!” – Our toddler doesn’t like to go #2…at all. Holds it for days. Anyone else have this problem?

“Your vagina is not a toy!” – Yeah, this is my favorite. I couldn’t believe I had to say it either. It was a bath time thing, body exploration…enough said.

Ahhh… the sweet sounds of parenthood.

what is the one thing you said this week that has surprised you?